Under the city something waits in the dark.  It feeds on waste, debris and weakness  and casts an ink black reflection of the corruption in the Mayor’s office.
Fat Tony Marsland plans his Expo and ignores the coming pandemic whilst Jason, a powerless failure, deserted and almost broken, falls in love with Jenny. Jenny is a thief.
In 1347 Jani Beg lays seige to the city of Caffa before commiting an act that will bring the black death to the rest of the world. You can’t fight the Rat King, if you don’t kill it you are it. 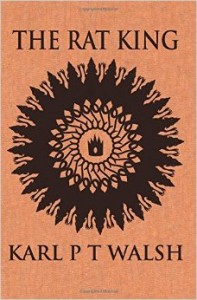 During the summer of 2015 the city of Manchester is in the grip of a council strike. Bins lie uncollected, local services are shut down and on the streets homeless people go missing. Amidst the detritus three strangers  are brought together; unemployed failure Jason, nurse and shoplifter Jenny and Jan the busker. Prompted by a lack of action by the police Jason follows the tracks of a homeless man to the city’s underground sewers where he encounters a monstrous tangled mass of Black Plague rats living and growing under the city sustaining itself on the inhabitants indulgent waste.

Jason’s exposure to what he soon understands is The Rat King lands him in  hospital where he meets and is nursed by Jenny. As similar cases start cropping up with terrifying speed amidst fears that antibiotics are no longer working, Dr Karim recognises the signs of an epidemic, Bubonic Plague. With an epidemic imminent Karim is driven to issue a health warning to the local populous but is censored by the corrupt mayor, ’Fat’ Tony, who fears it will destroy the International Festival and scare away the visiting billionaires. As the situation reaches crisis point Jan takes action, introducing Jason and Jenny to his friend Professor Werner. The Professor recounts the folklore surrounding The Rat King, whereby rats bound together by their tails become a single ferocious tyrant controlling a horde, and how the resulting infectious Black Death will spread if action is not taken immediately. With no other choice the unlikely team hatch a dangerous and potentially fatal plan to expose the Mayor and ultimately destroy The Rat King. But has the plague already spread too far and what is the source of the melody that haunts the insatiable beast?

The Rat King is an engrossing and clever contemporary take on an historic piece of folklore presenting a dystopian future for civilised society if greed and corruption go unchecked. Karl Walsh’s lyrical prose will capture and horrify readers’ imagination as he illustrates this disturbing political metaphor and the spread of this very real social malaise. Currently being adapted for the stage and screen, The Rat King is perfect for fans of both Orwellian fiction and horror genres.

About the author: Lancashire born musician Karl Walsh experienced early success with the band, To Hell With Burgundy before moving to Brittany, France for several years with his best friend and wife Pauline. He has since moved back to Manchester to set up his own record label, Earliest Record and a new band The Happy Future. Karl is also a qualified Lawyer graduating with a law degree from Manchester M.U. Now working on new material, Karl splits his time between the law and the arts. The Rat King by Karl Walsh (published by Create Space RRP £8.99 paperback, RRP £1.99 ebook) is available to purchase from online retailers including amazon.co.uk and to order from all good bookstores.

The Rat King Is Coming !