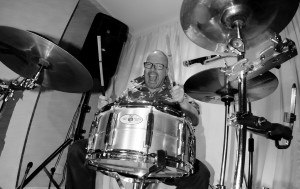 Drum Mic’ing is a hotly contested issue.  There are lots of ways to do it.  This is how we did it this time.  You can hear the results for yourself here. https://soundcloud.com/karl-walsh3/a-wonderful-end 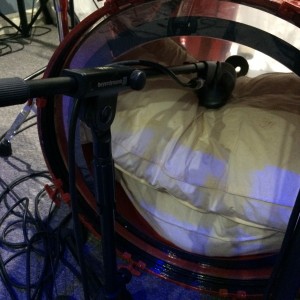 Inside for bass and depth  the Shure B52  right inside the drum, pointing at the beater.  (Notice the excessive  padding in there! Frederick Apps loves it.) 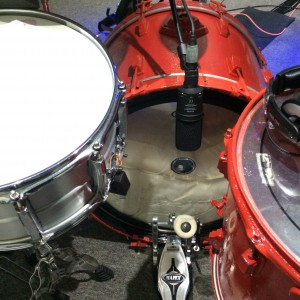 Outside hovering over the front of the bass drum an Audio Technica AT 4040, this condenser mic will pickup the top end of the Bass drum as well as the depth it will also provide the attack as the beater hits the skin.  (I had to be careful here not to get in Frederick’s way) 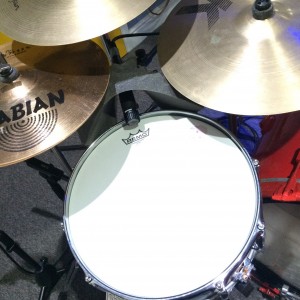 For the snare we used the popular SM57 both above and below.  (Notice that the mic above has been shrouded with insulation to try to minimise the bleed from Frederick’s ‘too low’ cymbals)  This mic should be close to the skin and also pointing at the place where the drummer hits the skin. 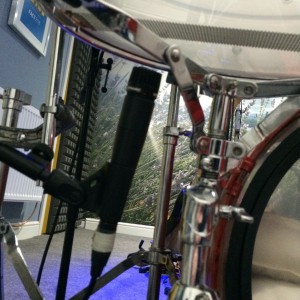 Below the drum we point the mic right at the snare! 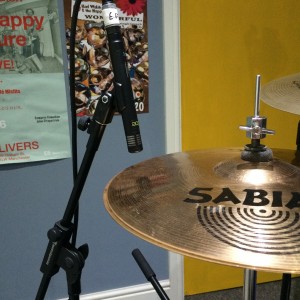 The HiHat mic is an AT 4041  the general rule here is nearer the edge the higher the frequency   (Nearer the centre of the cymbal gives you bassier  warmer tone.)  I wanted it crisp and high. 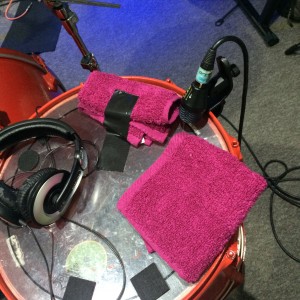 Frederick only uses a floor tom  (go figure)  we used this E 904 that clips on to the side of the drum.  It was so easy and the sound from it was immense. (Even after Frederick taped all of the towels out of the bathroom onto the skin to dampen it.) 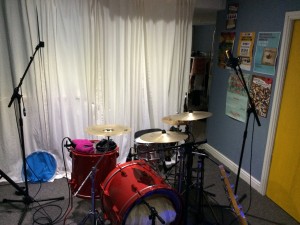 We set the overheads to the left and right of the kit suitably far away to get a decent stereo effect but not so far that they  missed any of the bass frequencies.  I used AKG 414 (because its the best mic I’ve got)  and Karl Markham’s Rode NT2-A.  I didn’t worry about them not being a matched pair because Fredrick’s kit is not symmetrical in any sense (neither is he). 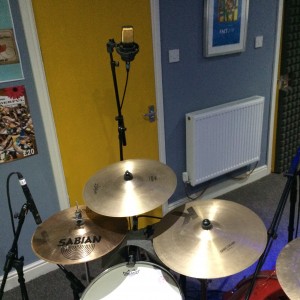 Its worth noting that the centre of a kit is not where you might think. Experienced engineers will point out that the centre line is drawn through the snare and the bass drum.  so we set up our mics slightly to the front and left and to the back and right.

The mics were plugged into a Focusrite audio interface that was in turn firewired to a an iMac running Logic pro X.